Slovak young ambassadors were in a wilderness camp at Veľkolélsky Island 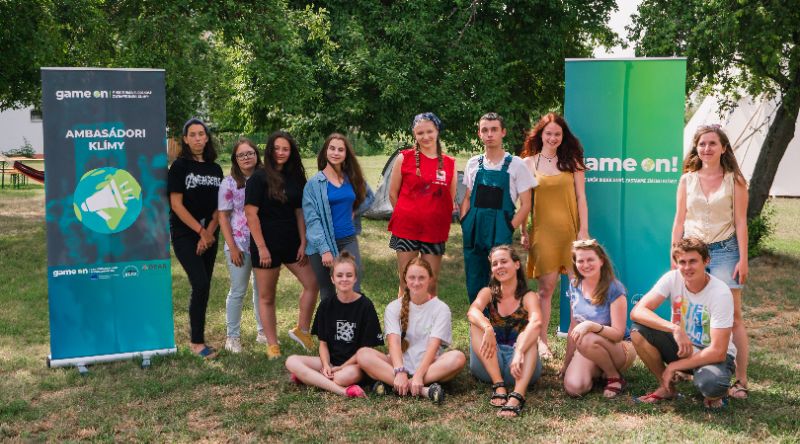 In the week of July 12-14, BROZ in cooperation with Green Foundation organized a camp for their young climate ambassadors.

The ambassadors stayed in BROZ´s camp near the island of Veľký Lél. A rich program awaited them throughout the week, which taught them more about climate change and helped them work on their projects.

It started with an introductory day connected with an excursion around Velkolélsky Island and the eco-farm, which BROZ manages there. It is a place that BROZ set up with the aim of closer access to the eastern part of the Danube floodplain forests and Veľkolélsky Island. There and in several localities nearby, BROZ carries out conservation activities - such as cattle grazing, pruning of willows and planting of native species of floodplain forests. It is an ideal place to acquaint ambassadors with nature conservancy activities.

Tuesday continued with a greening course by poet and copywriter Šimon "Šimpe" Ondruš and a workshop on communicating climate change with Bogi from the Green Foundation. On Wednesday, the ambassadors moved to the Dropie environmental education centre, where they seen the negative effects of current agricultural methods and found out more about the issue of supporting biodiversity in the agricultural landscape. On Thursday, the ambassadors continued to work on their projects - they participated in a project management workshop and then had time with their coaches. At the end of the week, they saw the island and the arm of the Danube from a boat and tested a new climate game from Been there together in Komárno.

The Landscape of Climate Change
September 16, 2021
Get (it) on Board!
September 10, 2021
An educational field trip to Rila Mountain
September 8, 2021
Climactic laughs
August 31, 2021
Five key messages from the IPCC report
August 9, 2021
BROZ takes part in the Citizens' Dialogue and influences the debate on Europe
July 29, 2021
An eco day-off
July 18, 2021
For a life-affirming economy!
June 25, 2021
Grasslands and their impact on climate crisis
June 20, 2021
If you’re a gamer – at least do it for the planet
April 17, 2021
The new way to “compensate“ your carbon footprint – no, forests alone will not save us from climate change
March 26, 2021
In the past 75 years many flowers started raising the level of ultraviolet (UV) pigments in their petals
March 25, 2021
The privilege of Protest
February 15, 2021
Considering and addressing crises together — with intergenerational solidarity
February 12, 2021
Paving the way to a climate-friendly future
February 10, 2021
Petitioning Campaign to Protect Biodiversity from Intensive Agriculture
January 28, 2021
Call for the revision of the Recovery and Resilience plan of Slovakia
January 27, 2021
Join the Nature and Climate Online School!
December 1, 2020
“Greetings from Climate Change!” campaign
November 27, 2020
LFN takes part in the LAMPA conversation festival with a discussion “Youth and climate sadness: How do you cool down your mind and live on?”
September 1, 2020
Young people at “Game On Climate Change” summer school generate ideas for mitigating climate change
August 21, 2020
Bulgaria stands up for Natura 2000
July 28, 2020
Dumbrăvioara, the Stork Village
May 26, 2020
Concept of Earth Overshoot Day visualizes global injustice
May 20, 2020
What habits should be kept after the quarantine is over?
May 15, 2020
EXCLUSIVE: Great Bustard nest found in Romania!
May 14, 2020
On 22nd of April, Bulgarian Biodiversity Foundation launched a campaign for young ambassadors.
April 22, 2020