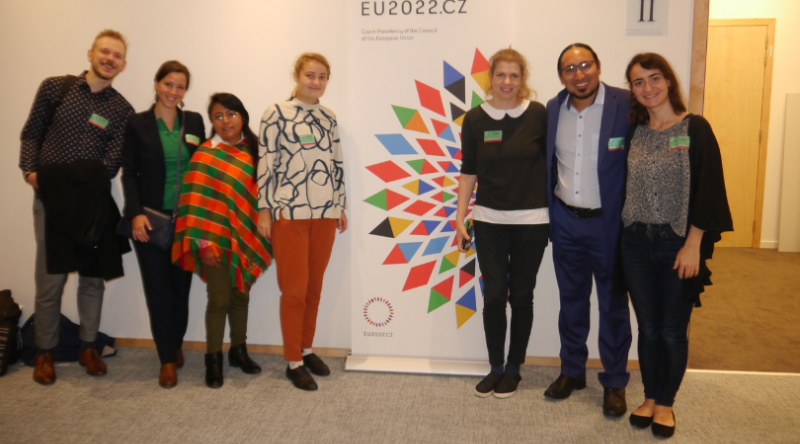 A major focus of the speakers tour in the wake of the COP 27 for our guests from Central America and us as CIR was the topic of climate finance pushing for finances to compensate for climate induced losses and damages. Thus we are very happy that all the work that has been done by so many, including us, pushing for this goal has finally taken an important step forwards during COP 27 with the installation of a finance facility for loss and damage.

However, our work and that of the speakers does not stop here! We have pushed and will push for polluters, both companies and governments, to make up for the damage they cause and fill the loss and damage fund but and all other relevant climate finance funds with sufficient fresh capital.

For the funds to reach the people who most need it, civil society actors’ role to ensure transparency and good targeting is another important point for us. Backing the civil societies’ awareness with political support has been one outcome of a meeting with Spanish member of European Parliament Cesar Luena who will send official cards to the climate and environmental committee and to the external relations committee to inform about current misuse of climate finance in Nicaragua.

Also, German MEP Peter Liese and his team as well as Mikuláš Peksa and Markéta Gregorová, Czech members of the European parliament, currently holding the presidency, have been sensitized about the already occurring effects of the climate crises in Central America and the regional demands for compensating climate related losses and damages. All have shown great understanding and willingness to continue the communication, promising from Czech side to push for a climate refugee status seeing that the climate crisis sometimes leaves some people no other chance but to leave their home country/forced migration.

The politicians from the European Parliament are not the only ones they talked to before the COP27: "We have already experienced two extreme weather events, Eta and Iota, in 2020," said Luis González, a climate rights activist from CIR's partner organization UNES in El Salvador, during a conversation with Maria Klein-Schmeink, a member of the German Green Party in Münster. "And yet there is no mechanism to compensate countries in the Global South for damage and losses caused by climate change."

The tour guests also spoke with activists. For example, at the stop in Lützerath. The village is threatened by lignite mining and has become a symbol of the German climate movement for the 1.5 degree limit. Less than 100 meters from the village border is the mining edge. Local activists are holding the fort and want to prevent demolition by the energy company RWE. Luis González was shocked by the extent of the destruction of the landscape: "When I see pictures like this, I think of Latin America, not Europe."

During a roundtable discussion, he and Marlen Corea, Environmental coordinator of the indigenous Lenca community in Honduras, make clear how important it is to fight mining because it limits our ability to do something about the climate crisis. Again, the guests from Central America emphasize the Global North's responsibility to offset losses and damages in the Global South due to high greenhouse gas emissions.

Climate changes the world and we need journalists to write about it
January 25, 2023
How does climate anxiety work? Slovak young ambassadors met with a psychologist
January 25, 2023
Police evict climate activists from German village slated to become a coal mine
January 18, 2023
Carbon Negative Art, or How to Make Art Sustainable?
January 3, 2023
How to Teach Climate Change?
January 3, 2023
The World Cup in Qatar (not only) from the viewpoint of climate law
December 20, 2022
Your Game On Holiday Tips
December 19, 2022
Circular economy – The only solution against plastic waste from food delivery
December 15, 2022
Speakers Tour in Prague
December 8, 2022
Electric cars – Are they really as eco-friendly as we think?
December 7, 2022