The new way to “compensate“ your carbon footprint

Companies and individuals pay for their waste to be properly treated and recycled. In some European countries, drivers already have to pay for the pollution their cars emit – in Lithuania the same kind of environmental tax is under consideration. But what about the carbon footprint? Some business companies are now offsetting their emissions by planting forests, and such a way to „buy out“ your sins is becoming more and more popular. However, scientists and environmentalists fear that this will stay the corporate world’s only effort in the fight against climate change, without any serious changes in production or delivery chain. Forests or meadows alone will not pull us out of the climate crisis. Discussion regarding this particular issue was held in the event, organized by British Embassy Vilnius, where presenters from British, Lithuanian and Latvian non-governmental organizations expressed their views on the topic. 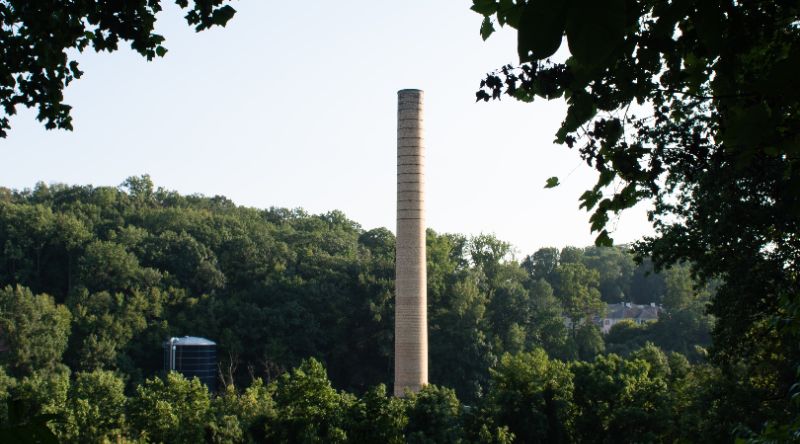 Great Britain‘s ambassador in Lithuania Brian Olley started the event saying that countries which will be most effective in fighting climate change will not be those where governments will tell people what to do. Such countries will be the ones whose citizens will search for more sustainable decisions and press their governments to take action and non-governmental organizations will demand the change.

„Fighting climate change is not only the responsibility – it is a possibility. We strive to learn from each other, be catalysts of change and grow citizen power to fight climate change“ – said Brian Olley.

Christopher Moss, representative of the United Kingdom‘s Green Building council named a number of nature based solutions which could be installed in urban areas.

“What are nature based solutions? They encompass all kinds of green and blue infrastructure, which could be used individually or joined into a system. Green roofs, green walls, drainage systems, green zones near the streets, parks, water bodies, wetlands and swamps” – said Ch. Moss.

The more such solutions a city has, the more it is resistant to floods, droughts, and other climate irregularities. Nature based solutions provide cool, purified air as well as, contribute to better psychological health and provide spaces for sports or simply socializing.

From “nice to have” to necessity

Green infrastructure protects biodiversity and provides much needed green corridors in the cities –many cities lack them. Ch. Moss noted that green spaces can also boost the value of certain land or buildings, so they can also contribute to the growth of the economy.

It is said that in Great Britain around 5 million buildings stand in flood risk zones. Also, during the last heat waves 1500 Britons have died and it is estimated that another 7000 could die from the upcoming ones.

“In this situation nature based solutions are still viewed as “would be nice to have” rather than as a necessity. There is still no permanent financing for it and the value of green infrastructure is perceived differently in different departments or municipalities”- noted Ch. Moss.

He and his colleagues will soon announce 7 principles of nature-based solutions to be implemented in Great Britain. They would be used as an advisory document for architects, property owners, municipality employees and urban planners.

Forests and wetlands absorb one quarter of our emissions

The leader of Lithuania‘s Environmental coalition, Lina Paškevičiūtė, is working to draw the government's attention to the potential of the country's forests and wetlands.

„When we look at the map, the territory is divided into forests, farmland, residential land and other land. Forests and wetlands have the highest potential to absorb greenhouse gas emissions. That means, when we cut the forest and turn it into farmland the proportion of emissions is growing. Meanwhile, when we turn farmland into the meadow, we cut those emissions“ – explained Lina Paškevičiūtė.

Lithuania, same as other European countries, submits reports for European Commission about its annual greenhouse gas emissions. It is counted that in 2019 Lithuania emitted 20 000 kilotons of CO2 equivalent, but Lithuanian forests and wetlands have absorbed a quarter of it. In the rest of Europe numbers are similar: in most countries forests and wetlands absorb the biggest part of greenhouse emissions.

“Nevertheless, wetlands in most of the countries are still attributed to the territories that emit, not absorb greenhouse gas. It is the case when wetlands are used for digging peats or as farmland. We should stop this practice and use wetlands to stop climate change. We should value our forests, meadows and wetlands as natural greenhouse gas absorbers”- urged L. Paškevičiūtė.

Farming can be done on wet territories too

In the discussion with guests from Great Britain and Estonia, Justas Kažys, the project coordinator of “Game on” project in Lithuania and climatologist of Vilnius University noticed that nature already has its own resources to heal from climate change. The only question is how we could help it, by bringing more green territories into the urban spaces - our concrete-paved cities?

“According to the Intergovernmental Panel on Climate Change (IPCC), green territories should naturally absorb almost one third of greenhouse gasses. I do not doubt this fact, but it is truly achievable only if all countries will join forces and include nature based solutions in their government strategies and municipal planning. If it’s not done on a large scale it doesn’t  work” – said J. Kažys.

According to another participant of the discussion, project manager of wetland restoration Nerijus Zableckis, one tenth of Lithuania’s territory is covered with wetlands. Decades ago about three quarters of these lands were drained and used for commercial forest or digging peat, or as farmland.

“Now drained peatlands exhaust major amounts of CO2 into the atmosphere. We should stop using peatlands, wetlands and change the way farming is done in those territories. Germany and the Netherlands are showing examples of a new way to use those territories: paludiculture. This term refers to growing plants that grow in wetlands and in peats with restored water levels. Those plants can be used as a feed for farm animals, building materials and other” – explained N. Zableckis.

Growing forests do not dismiss us from the responsibility to change

Representative from Latvia Fund for Nature, Ojars Balcers added that in Latvia, the potential of peatlands is also huge; in addition, about half of the country's territory is covered by forests.

“Nature based solutions aren't something new – we just forgot them, but we definitely should apply them wherever we can – said Paul de Zylva, sustainability analyst and representative of British organization “Friends of the Earth”. – At last businesses and governments are starting to understand that it’s not possible to proceed without changing anything. There are discussions, how we can fix what is already done? But while the discussions are ongoing, why don’t we simply stop the activities that are most harmful? For example, in Britain the ban on selling peatlands to private persons is on the way, as well as the decision to stop subsidies for farmers who use fertilizers heavily and damage soil.”

The speaker expressed his worries that businesses are choosing the path to plant forests, they do not change any other processes of their business.

“For example, London Heathrow airport is planning a huge expansion and declares it will offset its effect by investing in forests and wetlands. No, this will not work. Business should not be allowed to get away with forest planting. Some businesses do not even plan to do anything more besides planting forests. This could cause even bigger problems in future. Businesses should feel pressure from their clients in this, because we have a decade left to change things” – warned Paul de Zylva.

He added that forest planting also has to be a planned action, because planting it wherever you find free space may not help to stop climate change.

Project manager of peatland restoration Nerijus Zableckis thought that forest planting can be a short term solution for businesses who are searching for ways to make their production more sustainable.

“This can be a temporary solution for a certain period, until businesses find a way to change their technologies” – said N. Zableckis.

Discussion was closed with remarks that we should appreciate more territories that absorb greenhouse emissions, stop exploiting them, however not expect that they will be the silver bullet. We must put our mind to it and find other ways to minimize the emission and pollution caused by manufacturing.

„We need input from various sectors – not only non-governmental organizations. Besides, in Lithuania we still lack some scientific data to prove how nature based solutions are helping us to tackle the climate crisis“ – said Nerijus Zableckis from Lithuanian Fund for Nature.

“I think that investments into natural territories or their restoration should keep growing. However, we should not expect that nature alone will save us – added Ojars Balcers. – In our discussion we touched the aviation sector: this industry is emitting too much, there are too many flights – we must admit that”.

“I also observe the backlash from farmers. They do not want to change anything, their “business as usual” they do not want to lose their financial benefits, so we keep fighting, when it‘s about time to sit together and find a solution“ – concluded „Game on“ project coordinator Justas Kažys.