The 10th Annual Biodoversity and Climate Awards ceremony was held

What is now a 10-year-long tradition. 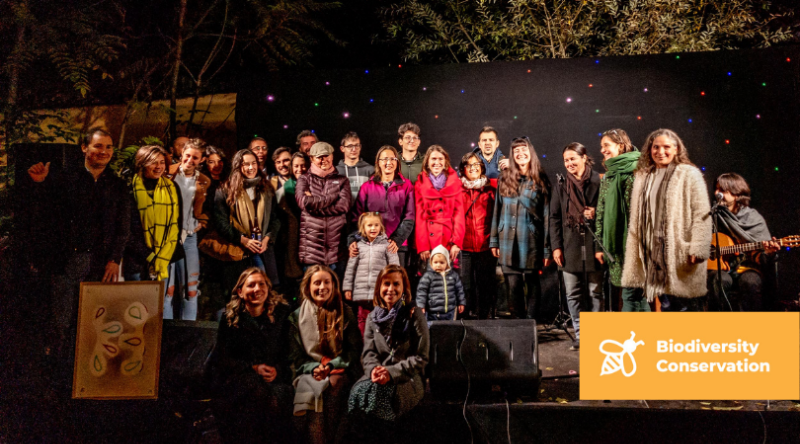 The annual Biodiversity and Climate Awards were presented this year in what is now a 10-year-long tradition that originally started in 2006 – a particularly difficult year for Bulgarian nature.

The names of the awards themselves have been inspired by and capture the spirit of the various campaigns that have been conducted over the years - Strandzha, Irakli, GMO-free Bulgaria, The Forests Act, Yailata, Pirin, Kresna, etc. The annual awards are the only initiative of their kind which recognizes and promotes the success of activists, organizations, politicians, businesses, the media, institutions, or experts that contribute with their work towards nature conservation. As of 2020, special attention is also paid to the fight against climate change as one of the greatest challenges facing humanity.

The team of the Bulgarian Biodiversity Foundation prepared the 10th edition of the awards ceremony with a lot of enthusiasm and made sure this evening of celebration was possible for all 46 nominees in the context of a pandemic.

The ceremony took place outdoors, on Friday evening, making the most of the natural autumnal décor at The Room at the Site. For the purpose of avoiding a large gathering of people, it was decided that only the nominees would be invited and that the ceremony would be live-streamed on the Bulgarian Biodiversity Foundation Facebook page. For people who did not have a green certificate, there was an opportunity to take a rapid antigen test. This enabled us to ensure the safety of all participants.

Aleksandar Evtimov - Shamancheto and Yanina Taneva from ‘Ideas Factory' hosted the ceremony with the creative help of actors from the ‘Storyhunters’ Playback Theatre, while Konstantin Kuchev and Neven from the band ‘Taraleshta’ were responsible for the musical performances of the evening.

The winners were selected by an independent jury: Iva Doychinova, a journalist known for her active citizenship, Director of BNR Radio Sofia program and the face of numerous social campaigns, Radoslav Parushev, writer and lawyer, Krasimira Velichkova, Executive Director of the Bulgarian Donations Forum, and Dimitar Dimitrov, entrepreneur,’Pirin Ultra’ organiser. All 46 nominees were also competing for the audience award in the six categories. The voting was public and it took place on Facebook.

Who are this year’s winners?

Category: Most successful campaign related to biodiversity conservation and climate

The Jury Award: An initiative for the conservation of old forests in Bulgaria by WWF, The Association of Parks in Bulgaria, Balkani Wild Nature Association, the Executive Forest Agency and the Ministry of Agriculture, Food and Forestry – an extremely successful campaign which yielded firm results and showcased the good partnership between NGOs and state institutions. Thanks to this initiative, a large percentage of the old forests in the Natura 2000 network is being protected and managed without the need for logging.

The Audience Award, with 515 votes, was presented to two secondary-school students from Kyustendil – Atanas Ivanov, 16, and Stanislav Todorov, 17, for their conservation efforts to protect the Shegava River canyon. The youths are working hard with the aim to have the area declared a protected site.

The Jury Award went to the Bulgarian National Radio and all of its programmes: ‘Horizon’, ‘Hristo Botev’ and regional radio stations – Varna. Burgas, Sofia, etc. which covered a variety of nature conservation-related topics. Journalists from the media have covered most of the hottest topics which were nominated this year.

Audience Award: The team behind Bivol website, as usual, captured the audience‘s hearts with their shocking revelations. The team ensures that we learn the truth about nature-related crimes.

Category: Politician who is most dedicated to Bulgarian nature

The Jury Award was presented to Ivan Velov for his consistent efforts to bring to close court cases which are of key importance for nature conservation, and who, through his work, has managed to win enough votes and be elected as a Member of Parliament, and who has recently won an important case against Asarel Medet.

The Audience Award, with an unequivocal win of 1,000 votes, went to Kiril Petkov for his convincing economic arguments which he presented in support of the protection of Koral beach and the last few wild beaches in Bulgaria, and for disproving speculations, clichés and oppositions between conservation efforts and the development of business and tourism. (Kiril Petkov sent a special video message for the ceremony).

Category: Responsible Businesses (in terms of nature and climate)

The Jury Award went to VMware for their ‘Human Superpower’ project, which is a significant effort – to encourage, record and report how employees are reducing their carbon footprint when they commute to work or by participating in conservation initiatives, and how they are reducing their plastic waste.

The Audience Award was presented to Mariya Georgieva and Mariya’s Sweets and Cakes, which is guided by the zero waste concept and hardly produces any waste, discourages the use of plastic and paper packaging and gives a 5% discount to people who bring their own box.

Category: International expert with a contribution to Bulgarian nature

The award was presented to both nominees – the young Yovan Andevski from North Macedonia, who actively works for the protection of vultures, and to Wolfgang Fermut from the Frankfurt Zoological Society for all of his efforts directed at nature in Bulgaria and the countries from the Balkan Peninsula.

Everybody in this category deserves to win an award for their selfless, and often, voluntary work and for the time and efforts dedicated to the cause.

The Jury Award was presented to Emiliyan Stoynov form the Fund for Wild Flora and Fauna, for his tireless efforts to reintroduce vultures in Bulgaria. For the first time this year, a cinereous vulture started nesting in Bulgaria and that is thanks to the successful joint campaign carried out by Green Balkans, FWFF and the Society for the Protection of Prey Birds.

The Audience Award went to Vasil Todev after a very tight competition with Rada Boneva. Vasko leads nature conservation efforts in the Rhodopi Mountain and the Velingrad region, whilst Rada is a young person known for her active citizenship with regards to sustainability in all its forms – from second-hand fashion to a healthy and environmentally-friendly lifestyle.

The ‘Breathe Devnya‘ active civil campaign also deserves special attention as it was nominated in several categories. We were all moved by Vanya Zaharieva’s speech at the end of the ceremony. As a representative of the ‘Breathe Devnya’ campaign, she shared a symbolic story from a mountain village and expressed her gratitude to all civil associations who ’have put their buffalo-cows to the carts and are building their churches on the mountain tops‘ – Atiya, Elin Pelin, Varna, Devnya, Blagoevgrad, Pernik, Ruse.

Huge thanks to all who were involved in the ceremony, to all of the nominees, the nominators and to the people who care for Bulgarian nature.

The Bulgarian Biodiversity Foundation awards were organised as part of the ‘GameOn! Don’t let climate change end the game‘ project, financed under the European Commission‘s DEAR programme. The team from ‘Ideas Factory’ played a key role in the successful organisation of the event.

For more information on the winners and nominees, please, visit: https://bbf.biodiversity.bg/bg/Nagradite-2021.c312