Stratocumulus cloud type is are in danger of extinction

How can the science behind the clouds become art and influence how we react to climate change? 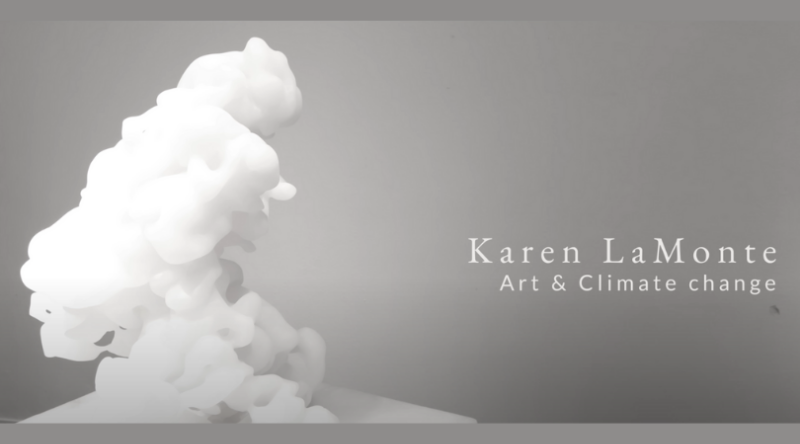 How can the science behind the clouds become art and influence how we react to climate change?An artist has decided to take his share in confronting climate change. That’s a challenge that suits artists more than many others. They use a language which affects our emotions much deeper than any politician can.

Do you like clouds? Imagine walking up on a sunny summer afternoon to that mountain just nearby, and laying down on the grass on the hilltop, tired and all sweaty after the hike, watching the beautiful marshmallow clouds in the sky. They are growing and growing… and getting ever thicker, until it starts raining. Not just raining but lightning as well. So, you start running down, ending your beautiful afternoon soaked to the bone. But do you know what made those beautiful and innocent cumulus clouds become evil cumulonimbus clouds? Karen LaMonte herself may not have known the answer, until she started working with clouds. Before becoming a true fan of the clouds.

She decided to work with climatologists, which she found indispensable to create exact copies of clouds using different artistic techniques. As she said herself: "I wanted the cloud to be scientifically accurate, I didn’t want to be an artist drawing just a cloud, or what I thought about a cloud. So, I found a group of scientists in Zurich, Switzerland to work together with. It is really a moment when science meets technology meets art meets climate change”, Karen said about how it all started. The scientists were able to create a model of the clouds, and she started to work with one cumulus. The scientists calculated the exact weight of the cloud, so Karen was able to create the weight equivalency between the real cloud and her cloud of marble.

Karen is an American artist who lives in Prague at present and has been creating majestic and mysterious works of glass, ceramic, bronze, iron, paper and marble.

Her works range from monotype prints to monumental stone sculptures, and she became especially popular with her exploration of the natural world. The artist made several sculptures which are exact replicas of clouds, including a 130-centimeter-high cumulus cloud of marble, which is a robot-carved artwork based on scientific data. That piece was also shown in Venice, at the Glasstress exhibition of works marrying contemporary arts and glass – including objects based on real weather data and carved with the help of robots and a supercomputer. But Karen’s works are particularly inspiring. Her cloud sculptures express true meditation on weight and weightlessness. The marble captures the fluid nature of clouds into a frozen solid state.

Karen also made a sculpture of a stratocumulus. Stratocumulus clouds consist of large, rounded masses that form groups, lines or waves. They produce no precipitation, and when they do, it is generally only light rain or snow. Why? Because as Karen knows by now, stratocumuli are in danger of extinction.

Have you ever suspected that there are clouds that are endangered ‘species’, due to excessive CO2 emissions? There are. Karen explains why. “If the level of CO2 goes too high, then this type of cloud can’t accumulate.”

Why is it a problem if stratocumulus is extinct?

Stratocumulus produces only light rain or snow, but no heavy precipitation. However, these clouds are often seen at either the front or tail end of worse weather, so they may indicate storms to come, in the form of thunderheads or gusty winds. More of Earth's surface is covered by stratocumulus clouds than by any other cloud type making them extremely important for Earth's energy balance, primarily through their reflection of solar radiation. So we can easily understand why it is so important that we keep them alive.

Karen only uses carbon-neutral materials in her work. Her recent works focus on climate change – reflecting her long-standing fascination with themes where nature is inextricably interwoven with human society.

There are many museums in the world, which are focusing on Climate Change

The New York based Climate Museum mobilizes the power of arts and cultural programming to inspire this crucial shift toward climate dialogue and action, connecting people and advancing just solutions.

The Jockey Club Museum of Climate Change in Hong Kong is the first museum of  the world, offering an interactive, multimedia exhibition that showcases valuable collections and information about climate change.

The Museum of Tomorrow, in Rio Rio de Janeiro’s harbor is a science museum meant to explore, imagine, and conceive all the possibilities for constructing the future.

The Climate Museum in New York, has a mission to inspire action on the climate crisis with programming across the arts and sciences that deepens understanding, builds connections, and advances just solutions.

The climate crisis is the defining challenge of our time. We must rise to meet it together. If you need inspiration on how to act, visit those museums, or their webpages. Art is always our best inspiration.

Climate changes the world and we need journalists to write about it
January 25, 2023
How does climate anxiety work? Slovak young ambassadors met with a psychologist
January 25, 2023
Police evict climate activists from German village slated to become a coal mine
January 18, 2023
Carbon Negative Art, or How to Make Art Sustainable?
January 3, 2023
How to Teach Climate Change?
January 3, 2023
The World Cup in Qatar (not only) from the viewpoint of climate law
December 20, 2022
Your Game On Holiday Tips
December 19, 2022
Circular economy – The only solution against plastic waste from food delivery
December 15, 2022
All about what we accomplished around COP27 with Speakers tour and lobby meeting
December 8, 2022
Speakers Tour in Prague
December 8, 2022