Smart schools that have self-regulated heating, electricity, and water, better waste management, and plastic-free packaging – this is how the students of Alexander Copple Gesamtschule in Solingen envision their perfect school. 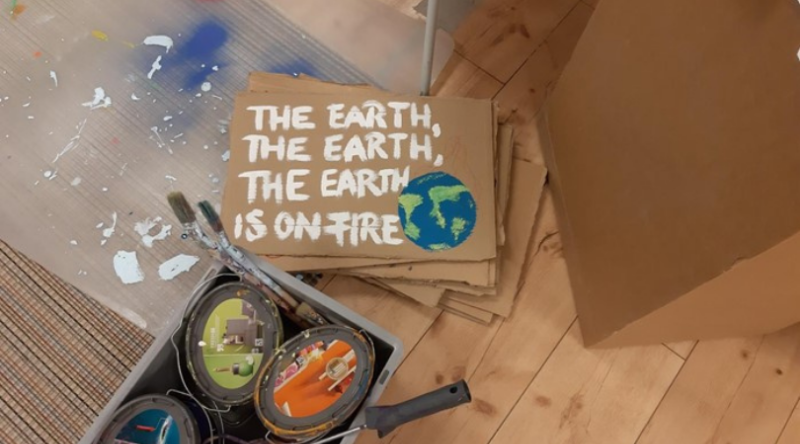 Through workshops, the school has implemented a campaign centered around climate change that provokes students to think about what they can do to make their habits and their school more sustainable. That way it tends to set up goals and spread the message that achievements can be made through changes.
Students from the school come up with their own ideas of how they can achieve the goals of sustainability that include gaining energy from solar power, nature-friendly school areas, and better digitalization in school so that resources and materials can be saved and less paper be used.

Last year a class of fifth-graders in the Alexander Copple school created an original music video about animal welfare and climate protection and developed a concept for a Veggie Day in their school canteen. That led them to 7,000 thousand views on YouTube and a win at the national class climate school competition, part of the project “Class Climate – Bring on the cool future”.

Both students and teachers in the school are being vocal on the topic of climate issues and are trying to talk about it and find any solutions.

“There are many things you can do at school for the environment”, says 16-year old student Kim after finishing a school workshop on sustainability.

Young people’s involvement in the climate movement is one of its biggest contributors. From Stockholm to Jakarta children and teenagers are taking a stand against climate injustice, walking out of class, marching in the streets, and demanding action on climate change. The topic of climate issues has become important for many young students all over the world.
23-years old Len is one of those young people, who are active on the matter. She has been part of the international youth-led movement Fridays for Future since 2019. The movement’s main goal is to demand action on a political level and to achieve that they are organizing strikes.

From 3 to 5 bigger strikes take place per year in the city of Solingen as Len says their biggest one in the town attracted 2,090 people.
Young people have been in the center of the climate change movement - from information campaigns through social media to taking action in the streets and going on strikes.

Students from the school explain that recently they are noticing more elderly people getting involved and going on strikes as well. A reason for that could be young people’s motivation and action that is transcending also to the elderly generations.

“I think it is getting better because many of them have grandchildren that explain stuff to them. And I see that with my grandparents as well. They worry what will happen with us and their children”, says Kim.

Sustainability and climate change are topics that do deserve bigger and global approaches, but they can also be implemented at your home, school, or workplace. The students of the Alexander Copple school are an example of that. Their ideas for the school environment show that young people are aware of the problem and are looking for solutions by pushing for change and they have already taken the lead on it.

This article reflects on the excursion in the Alexander Copple Gesamtschule and the ‘Fridays for change’ organization in Solingen that took part during the European Climate Camp – part of the ‘Game on’ project.