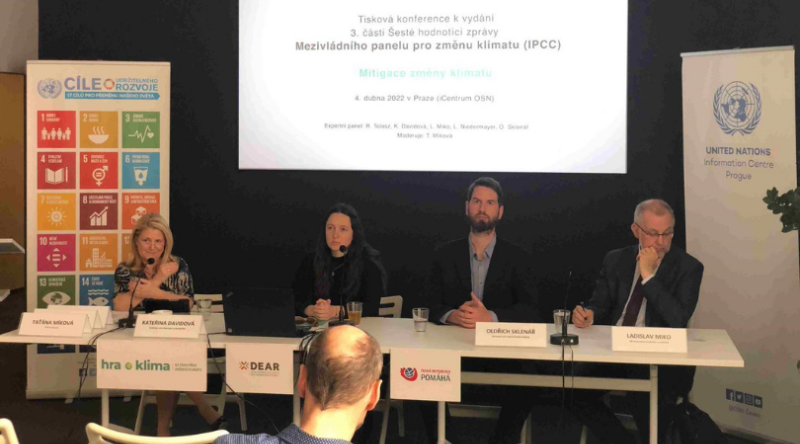 A press conference with the live streaming from Geneva UN Headquarters to the third instalment of the IPCC's Sixth Assessment Report was held on 4th April in the UN Information Centre in Prague, Czech Republic. According to a new report by the UN Intergovernmental Panel on Climate Change, climate action is still significantly underfunded. Achieving climate goals will require a multiplier increase in investment, across all sectors and regions assessed by the report. With reference to the modelled trajectories leading to the achievement of the goals of the Paris Agreement, the IPCC climate panel says that we need an immediate and significant reduction in greenhouse gas emissions in all sectors. The consumption of fossil fuels must be reduced immediately.

"What science foresees in this report will be the result of our current energy policy. We are on our way to global warming by more than double the 1.5 degree limit agreed by the states in Paris. Some government and private company leaders say one thing, but they do another. Simply put, they lie. And the effects will be catastrophic, " wrote UN Secretary-General António Guterres in response to the latest IPCC report.

IPCC insist that all countries must reduce their fossil fuel use substantially, extend access to electricity, improve energy efficiency and increase the use of alternative fuels, such as hydrogen. Unless action is taken soon, some major cities will be underwater, UN Secretary-General António Guterres said in a video message, which also forecasts “unprecedented heatwaves, terrifying storms, widespread water shortages and the extinction of a million species of plants and animals”.

The UN chief added: “This is not fiction or exaggeration. It is what science tells us will result from our current energy policies. We are on a pathway to global warming of more than double the 1.5-degree limit” that was agreed in Paris in 2015.

Providing scientific proof to back up that damning assessment, the IPCC report – written by hundreds of leading scientists and agreed by 195 countries - noted that greenhouse gas emissions generated by human activity have increased since 2010 “across all major sectors globally”.

Mr. Guterres described the latest IPCC report as "a litany of broken climate promises", which revealed a "yawning gap between climate pledges, and reality."

According to the report, the following measures in this order have the greatest potential for reducing emissions in the short term (by 2030): 1) solar energy, 2) slowing down the destruction of natural ecosystems, 3) wind energy, 4) carbon sequestration in agriculture and 5) ecosystem restoration and afforestation.