In Guatemala, a farmer’s dream for food put at risk due to the climate crisis

Spring does not bring the rain as before. Sudden heavy storms destroy everything you have been growing all year. Your only job — growing coffee — becomes an even more expensive and impossible endeavour. 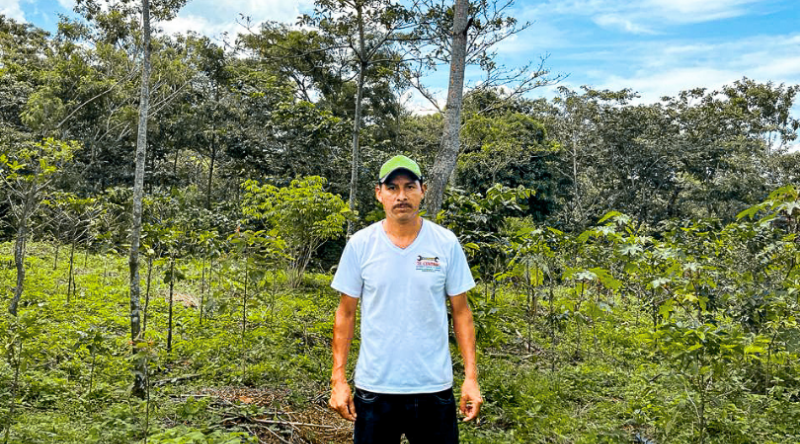 Enrique is a farmer from Guatemala who has firsthand experience with this struggle. For the past 16 years he has been growing coffee at his family farm on the outskirts of Escuintla — a plantation he inherited from his father and grandfather. He works there six days a week throughout the whole year and this is the main livelihood he depends on.

Each year, however, it becomes more difficult for him to earn a living. Good coffee yield requires specific climate conditions — rainfall, dry periods and warmth all of which should be easily forecast, as well as a particular tropical climate with rich soils and few pests. Guatemala has all of these things. At least it had until now.

The escalating climate crisis which, according to the UN, is now reaching ‘irreversible shifts’ is at the heart of the problems for farmers like Enrique. He says that over the past few years the country has experienced very long dry periods which prevent coffee from growing. When the droughts are over, the unpredictable rainfall and storms start which cause significant damage to his plants.

Enrique is not the only one who has noticed this. Guido Calderon is a coordinator at the civil organisation ASEDE whose main mission is to work towards mitigating the effects of climate change and decreasing the risk of food crisis in Guatemala.

According to him, the situation with the climate in the country is getting more and more unpredictable. This is due to the prolonged droughts and the increasing number of floods as a result of heavy storms which have affected Central America over the last couple of years.

As a result of climate change, the key rain periods for agriculture in Guatemala are shifting. In an attempt to adapt to the changing conditions, local farmers are trying new things like sowing the seeds in a different time of the year because the weather ‘is not what it was’, Calderon says.

Coffee farmers face another difficulty as a result of climate change. This is the so-called rust which appears on the plant — a fungal disease which proliferates under high temperatures and stops the process of photosynthesis in plants. The symptoms of this disease are triggered mainly by climate change and specifically by the rising global temperatures.

These findings are reflected in a study by the International Atomic Energy Agency (IAEA) which looks at different options for fighting coffee rust by using nuclear techniques. The study reports that the changing models of rainfall and temperatures increase the speed at which plants contract the disease.

For the past few years, researchers have been offering solutions to the problem which include the use of fertilisers and pesticides but they are not universally applicable because there are too many different types of coffee rust. In addition, the fight against this disease may cost a lot more for smaller farms than if they decide to give up growing coffee altogether.

This, however, may mean suffering losses which no one in Guatemala can afford. 54 thousand of all of the farmers in the country live in poverty and receive approximately 3.10 US dollars a day, and 19,4 thousand out of all farmers live in extreme poverty and earn under 1.90 dollars a day. This is according to the data gathered by the non-governmental organisation Eneritas.

Enrique falls into these worrying statistics. The profit he makes from producing coffee is less than 1 US dollar a day. Along with the climate challenges, a farmer also has to deal with the economic consequences.

Nevertheless, he believes that his problem can be solved but it will require a lot of effort both on a political and human level.

‘I want to continue growing coffee and have everything go well. I hope we will be shown some understanding and receive help on an international level, there need to be more direct transactions between producers and buyers and people should be buying more organic products’, says Enrique.

It is these decisions that allow him to keep thinking about his big dream — that next time we see each other, the produce would be bigger and that he would have sold more coffee which would allow him to secure the livelihood of his family.

Fast fashion – Trendy, but at what price?
November 25, 2022
Water as a source of life and a scarce resource in Guatemala’s high mountains
November 17, 2022
ECO ANXIETY, SOLASTALGIA AND WHY ARE WE SCARED?
November 17, 2022
Give Hope to the Future - Children's Drawing Exhibition and Climate Justice Workshop
November 4, 2022
Speakers Tour: Climate experts from Central America on a round trip in Europe
October 25, 2022
Become a beta tester for the Climate Game mobile app and win a Terra Futura strategic board game!
October 11, 2022
“Game On: Don’t let climate change end the game!” camp on the River Brasla
October 10, 2022
Tasting Climate Change
October 7, 2022
Latvian Fund for Nature at the camp
September 27, 2022
GAME ON! MEETING IN ROMANIA
September 23, 2022