We are attracted by gaming and get easily absorbed by games, whatever they are – computer games, board games or outdoor games. We not only have fun while playing - we also educate ourselves, socialize with friends and master new skills. This is the reason why even such complex issues as climate change could be explained and better understood through games. In this article we review the most interesting computer and board games related to environmental or climate change topics. 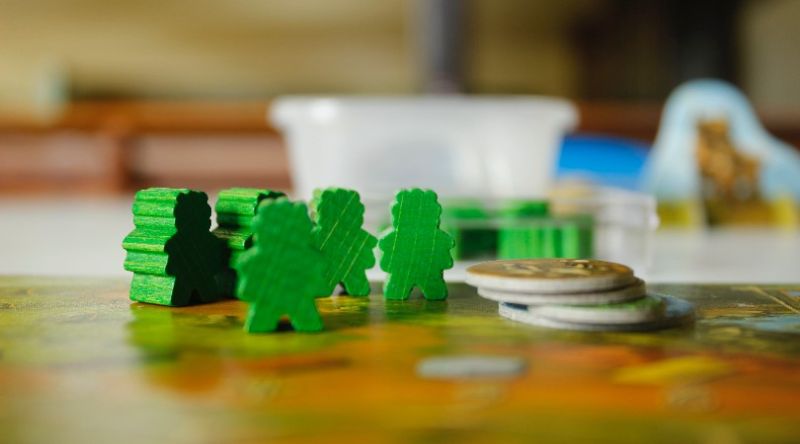 In 2020 more than 2,6 billion games were counted. And it’s obvious that a year in quarantine contributed to the rise of this number. The revenue of the gaming industry grows alongside the growing number of gamers: last year it reached 140 billion dollars – more than what was earned from Hollywood films, Bollywood films and music records together.

During the last decade many games focusing on environment or climate change were created. In the article “Nature Climate Change” scientists Jason S. Wu and Joey J. Lee acknowledged that such games are one of the ways to address climate issues.

Climate, global warming or climate change-related games fall into the category of more serious games, in other words, entertainment is not their main aim. Such games imitate and analyze real life problems and let players experience them. In video games those problems usually are energy efficiency, implementation of environmental innovations and minimizing the amount of greenhouse gasses emitted.

J. S. Wu and Joey J. Lee provide a table where they differentiate games depending on their type.

The power of games

“Games are a powerful tool to educate, convince or inform people about important topics – says Joey Lee. – Well designed games provide much broader possibilities of learning, compared to usual textbooks or videos. The player not only learns what is in the content, he/she also gets the chance to participate in a reality modelling.”

According to the United Nations Environmental programme  (UNEP) Chief of Youth, Education and Advocacy Sam Barrat, the gaming industry today is one of the most impactful.

“It’s reach and engagement powers are unprecedented. If supported in the right way, the sector can be a major partner in shifting the environmental debate” – says S. Barrat.

The United Nations Development Program (UNDP) has launched a mobile game called “Mission 1.5”. It aims to educate citizens about the impact of climate change and encourages them to vote for the best solutions to tackle it. The name of the game refers to the commitment to Paris agreement – to keep the average temperature below rising more than 1,5 degrees Celsius. The game’s authors expect this game to have approximately 20 million players worldwide.

Quite a number of platforms offer to play their games as video games or in an app, e.g. platform “Games 4 sustainability” offers more than 100 games of various complexity and themes. However, they all have something in common – all the games’ topics align with United Nations SDGs.

The platform “Legends of learning” helps teachers to make their lessons engaging and interesting while using games, based on scientific research and field research of nature.

The game “Climate Collage” was launched 5 years ago by V. Mansson-Delmotte (one of the members of the Intergovernmental Panel of Climate Change – ICCP). The game encourages players to put all the climate change processes and phenomena into one big picture, to see the link between the cause and the consequence. It is played in groups using cards with the most important climate change statements (and their explanations). Players try to find a logical sequence and a few hours later they have a clear collage of causes and consequences. Every game ends with the discussion.

From the 2018 game “Climate Collage” has become not only a game but an initiative as well, which aims to educate society about climate change issues. The organization regularly organizes workshops and plan to actively participate in this year’s COP26 meeting in Glasgow.

“The Climate Adaptation Game” is a game created by Swedish National Knowledge Centre for Climate Change Adaptation in collaboration with University of Linkoping and high school teachers.
In the game players take on the challenge to manage a fictional city, Weatherton. They must help it to adapt to climate change. The players would be asked to save a hospital from the rain-caused flood or create a form of agriculture resistant to droughts. Is that all? No, not even close!

“In addition to building a city resistant to climate change, you’ll have to ensure your citizens are happy, your economy is thriving and together work towards fulfilling sustainable development goals,“– says Pontus Wallin, one of the creators of the game.

The game can be played individually or with friends (players can choose from 7 different roles). It can be downloaded free of charge via this link.

Even respected scientific institutions, such as the Environment Protection Agency of the United States of America and National Aeronautics and Space Administration (NASA)  have started developing games, quizzes, riddles and challenges. In 2005 European Environmental Agency launched the game called “Honoloko“.

But everyone knows that a greater impact can be achieved by collaboration. Thus, United Nations Environmental Program initiated the project titled „Playing for the Planet Alliance“ , which brought together all major gaming companies (such as „Sony Interactive Entertainment“, „Microsoft“ and  „Google Stania“). The result of this collaboration was  „Green game jam“, organized last year, which brought together more than 110 million players. They were invited to try 11 games, created by the various studios such as “Angry Birds” or “Subway Surfers”. This year the same event is planned to be repeated on mobile platforms.

Invitations to play for the climate

Games do not always have to require complex solutions. They can simply invite players to admire nature's magic, just like “Photosynthesis”, created by Hjarman Hach (“Blue orange”) does by portraying the forest world.

The ability to create an even more diverse natural world is given to players in the game “Planet”, which was created by a Lithuanian Urtis Šulinskas („Blue Orange“). In this game you can create deserts and mountains and expand the territory of your woods, oceans and icebergs.

Project „Game on“, which unites non-governmental organizations from 8 European Countries is now developing both a board game and a mobile application. The main aim of the project is to educate young people about climate change processes through fun experiences and gamification.

In collaboration with game-making platform LoQuiz, one of the project’s partners, Lithuanian Fund for Nature,  launched “Vilnius climate orienteering game” in autumn. In this game citizens of Vilnius run through their hometown in search of places that are in various ways connected to climate change or unusual temperature records. This gave us a possibility to have a fun experience even during a strict lockdown, when all other events (even outdoor) were cancelled.

A similar game is soon to be launched in Kaunas. It was developed with the help of the project's Young Ambassadors – the pupils of Kaunas Jesuit Gymnasium.

Meanwhile, “Game on” partners in the Czech Republic, the organization called “Na mysli” stepped into the production phase of the board game “Terra Futura”.  According to the organization's director Viktorie Tenzerova, game players will be given the task to build a sustainable economy and protect their land.

“There will be different ways to do that, but not all of them will clean” – smiles V. Tenzerova.

However, the game is designed in a way where one „bad“ player, polluting the environment and only focused on the profit makes the situation worse for everyone – because we all live on the same planet, right?

Also „Game on'' will soon launch a special app, which will invite its users to nurture their own island and by doing so change their harmful everyday habits to those that help to stop climate change. The island will show signs of prosperity (native species of animals, green meadows, clean water) if the player maintains his/her sustainable habits. However, if the player proceeds with „business as usual“... you wouldn’t want to see what happens to this cute rabbit, would you?