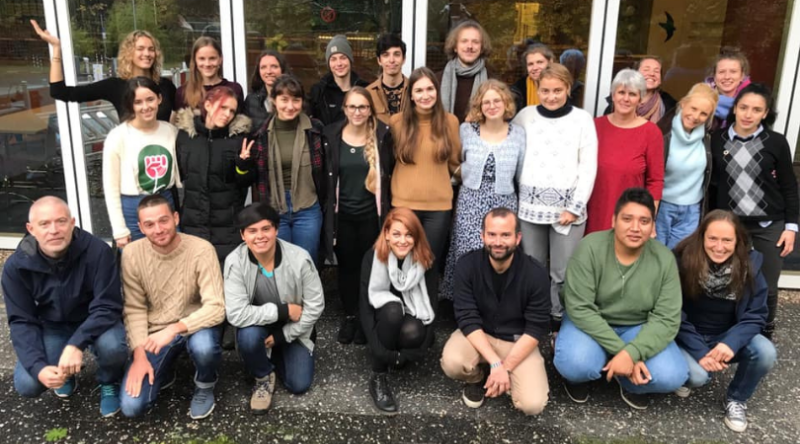 Climate justice movement activists from two continents and twelve countries came together in Solingen: they met at the “Climate Camp” from 29 October to 5 November 2021 to prepare for the major 14-day networking meeting in Nicaragua in 2022, and made plans for a climate-friendly future.

“I believe that we can bring about change, and that we need not simply stand and watch as our climate changes.” Adan Orlando Rivas Lozano travelled all the way from Honduras to meet with people involved in the climate movement in Germany. Other participants from Nicaragua, Spain, Lithuania, Latvia, Bulgaria, Romania, the Czech Republic, Hungary, Slovakia and Germany also attended the week-long camp in Solingen. All of the attendees campaign for climate justice in their home countries, where they are active in various associations and networks. As part of the Game On campaign, they are now networking to exchange views, to learn from each other, and to plan joint campaigns for a climate-friendly future.

“We can only develop socially just solutions in the fight against the climate crisis if we listen to each other. By exchanging views, we discover what moves people in different parts of the world, how they respond to the climate crisis, and what drives their activism.” Celia Meienburg, Climate Justice Officer at the CIR, accompanied the exchange programme on site in Solingen. During the exchange week, the group visited a number of local places of learning, the Wuppertal Institute, the Garzweiler lignite mining area, and also encountered local initiatives. The young activists also exchanged views with politicians in Solingen and Brussels, and discussed which measures could be taken at the local and European level to pave the way for a socially just climate policy that meets the 1.5C warming target.

Plans for a joint trip to Nicaragua in 2022

Nicaragua is one of the countries most affected by the climate crisis in the world. An increase in extreme weather events, prolonged periods of drought, and crop failure threaten the livelihoods of many people who are responsible for only a fraction of global greenhouse gas emissions. In spring 2022, the party will gain insight into the situation on the ground and, on returning to Europe, will raise awareness for the perspective of Central American people.

The trip to Nicaragua and the preparatory meeting in Solingen are being organised by the CIR in cooperation with its partner organisation La Cuculmeca in Nicaragua, the Forum für soziale Innovation, the City of Solingen, and the “Young Expertise” network run by the Förderverein Städtefreundschaft mit Jinotega. The exchange programme is part of our “Game On – Don’t let climate change end the game” campaign, and is co-funded by the European Union.