From the field to the lab with one of the young ambassadors and a Ph.D. student Nia Toshkova, part of the project „Game On | Don’t let climate change end the game!” 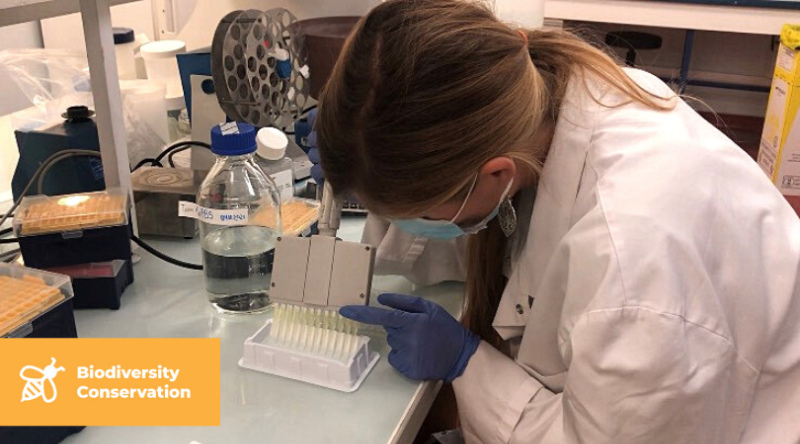 Bats make up the second largest order of mammals after rodents. There are currently 1,432 known species inhabiting all continents except Antarctica. Their specific characteristics, such as their ability for active flight and highly efficient echolocation, allow them to assimilate a huge variety of food resources and habitats. The ecosystem services provided by bats in different parts of the world range from pollination of plants and dispersal of their seeds to regulation of insect populations, including a range of agricultural pest species. Additionally, bats are unusually long-lived for mammals of such small size and possess highly evolved DNA repair systems, making them an indispensable model system for studying cellular functions related to aging processes or cancer development.

Unfortunately, many populations of bat species across the globe are declining. Cave-dwelling bats are especially vulnerable to disturbance during periods of torpor and hibernation. Although hibernating bats periodically arouse, such arousals are energetically expensive and can account for 75 % of winter energy expenditure. Disturbance related to more frequent extreme weather temperature changes during winter can cause premature arousal. This can deplete critical energy reserves to the extent that the bat is unable to survive the winter. Human disturbance is widely regarded as a significant cause of over-winter mortality in temperate-zone bats. This emphasized the need for more research effort to increase our understanding of the winter bat activity and the effect of climate change on this activity.

The main goals of my research are to:

1.) Improve our understanding of the influence of environmental conditions during hibernation. 2.) Predict the likely impact of climate change on the physiology of hibernating bats. 3.) Gather information on the relationship between winter activity and the individual health state of bats.

I was lucky to obtain additional support from the Bulgarian Biodiversity Foundation which allowed me to follow my research goals and share and promote my project and the importance of bats.

The study is concentrated on five caves in Bulgaria: Ivanova voda, Devetashkata, Parnitsite, Balabanova dupka, and Orlova chuka. They host the most significant winter colonies of Great mouse-eared bats (Myotis myotis and Myotis blythii) in the country and some of the largest colonies in Europe of the listed bat species:  Rhinolophus ferrumequinum, Rhinolophus hipposideros, Rhinolophus euryale, Rhinolophus mehelyi, Myotis emarginatus, Myotis capaccinii and Miniopterus schreibersii. 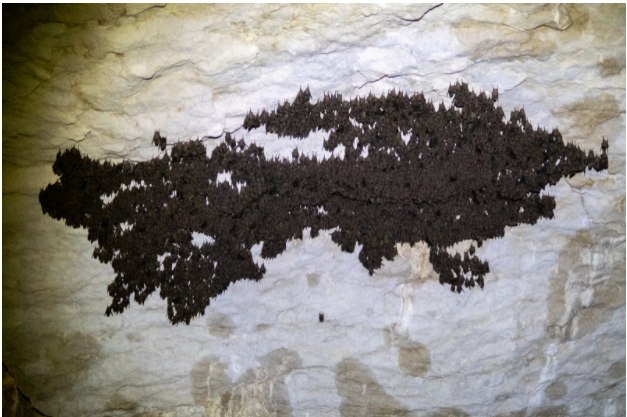 Photo: The winter bat colony in Parnitsite cave is one of the most important for the whole of Europe. More than 40 000 individuals of bats are spending the winter there.

How does outside temperature affect cave temperature? And how does cave temperature affect arousal? I’m applying passive acoustic monitoring (PAM), which is an increasingly popular technique in bat research where static detectors are deployed to continuously record bat ultrasonic echolocation signals over a certain period of time. PAM is non-invasive, requires less on-site survey effort, and is continuously operational regardless of environmental conditions, resulting in long-term datasets collected with minimal disturbance. Bat detectors have the potential to detect bats at a distance. I’m using passive acoustic methods at five important Bulgarian underground roosts to evaluate bat species richness and activity levels. Additionally, temperature and humidity loggers situated close to the colonies are recording data for the whole study period. I’m also recording water level changes in the water caves throughout the winter period and analyzing their effect on the activity of the bats. The described systems will collect data for the bat activity during the astronomical winter (21Dec - 21 March) of two consecutive winters (2021-2022).

To answer the third research question:

How arousal affects bat physiology and oxidative stress? I’m collecting bat samples before and after hibernation. In November, each year before the beginning of the hibernation season with mist-nets, she is catching bats at the entrance of the studied caves. From each captured individual, she is collecting morphological measurements together with photographic evidence for the health state of the wing membrane and dental health state, as well as samples for further molecular analyses.