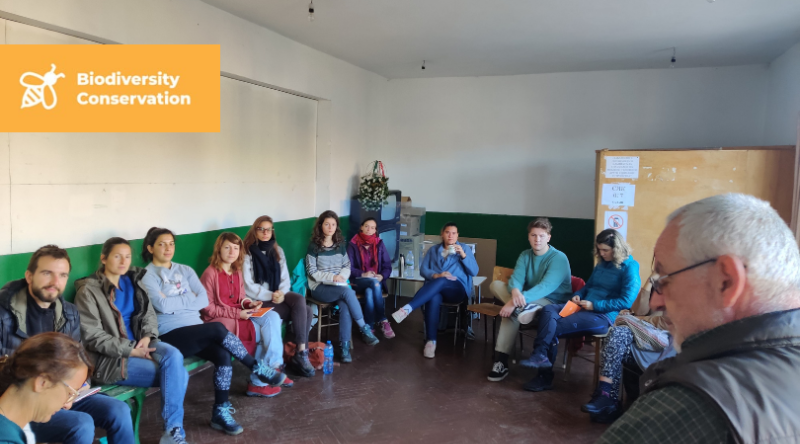 „How dependent are agriculture, our food and life in Bulgarian villages on the rising summer temperatures, irregular rainfall and the lack of climate forecast?”.  “What part of the food, grown in villages, which we were used to referring to as “pure food” in Bulgaria, is actually cleanly produced nowadays? How did the dynamic ecological, social and climate changes affect rural life?“

These were some of the questions a group of 14 young artists with interests intersecting biodiversity, climate change, and culinary heritage tried to answer during GameOn's Artistic educational wilderness camp. The camp took place from 22 to 30 September 2021 in Salash - a village in Northwestern Bulgaria close to the border with Serbia. It was realized in collaboration with a long-lasting project, working for the improvement of life’s quality in Bulgarian villages, called Baba Residence (baba is the Bulgarian name for a grandmother, used also for elderly people not an obligatory part of the family). For the period of the camp, 7 different experts were present with the group and one joined online.

Salash is a mountain village in Northwestern Bulgaria with an altitude of 576 m. It has only 85 inhabitants, most of them elderly retired people. The village is famous for its rich culinary culture, part of the Torlak ethnographic group. The northwest part of Bulgaria generally is facing a demographic crisis combined with very high levels of unemployment. A situation forcing the relatives of nearly 30 families from the village to live abroad. The people in the village have a low income and grow their own food in their gardens around the houses and are very dependent on their own food production. There are also several family-run businesses, mostly in the agriculture sector – vegetables and sheep raising.

One of the most important topics that appeared during the fieldwork was the long-lasting drought that appeared in recent years. Several striking stories attracted the attention of organisers and participants. The water in the village comes from sources related to snow and rainfall in the nearby hills. The river that is going through the village is getting dry every summer now during the last 20 years, while beforehand, it was used to move several watermills on its way. This year during the hottest summer months there was not a single raindrop for more than 3 months and most of the traditional domestic crops such as tomatoes, potatoes, Salashki beans, peppers, garlic, apples and pears, couldn’t grow or were underdeveloped this year. Even for animals, such as the sheep on the local farm, there was no grass for grazing due to the drought. These examples illustrate the big shift in the climate conditions and point to the big transformations needed in the traditional Bulgarian lifestyle in the countryside due to climate change. Local stories revealed how climate change made village inhabitants even more marginalized than they were and motivated the participants – artists, organisers and lecturers, to search for possible ways to find solutions, to support and improve the situation.

During their investigations of past and present, the participants also initiated volunteer actions in the village, organised a small festive event with a game and a theatre show for the local people and gathered the information for follow-up artistic projects. The camp’s engaging programme was presented to the participants before their arrival in the village. The broad spectrum of topics covered by all of the experts from scientific institutions, NGOs and consultants, were: climate change and its local dimensions in Northwest Bulgaria; climate change effect on biodiversity and natural resources; drought and aquatic resources of Bulgaria; how can sustainable agriculture and permaculture help to decrease climate change effect in food chain supply; food sovereignty and the cultural dimensions of it; socially engaged and community arts; ethnographic field research and the link between climate change and local traditions. All topics were presented to the participants, but were also open to local people and helped everyone get a better understanding of climate change’s links to local people’s life.

Participants in the camp residence believe artistic projects based on real-life impressions and research they concluded can speak louder to the Bulgarian audience about the climate crisis and raise awareness on climate change's effect on resources, locally produced food, social justice and local traditions. In the months to come, the participants will jointly develop several ideas and follow up activities to attract public attention or to support local communities in Salash. Some projects will aim to raise donations for solving local problems and to engage experts to find possible technical solutions on water supply in the village. Some of the speakers in the events already presented the right tools to use water more efficiently or possible ways to change the way crops are grown so that they require less water. However, political level decisions and targeted support are really needed to give back the power that Bulgarian villages had in the past and to solve the problems the whole food production sector will sooner or later face.