An educational field trip to Rila Mountain is showing that climate change in the mountains is already a fact. 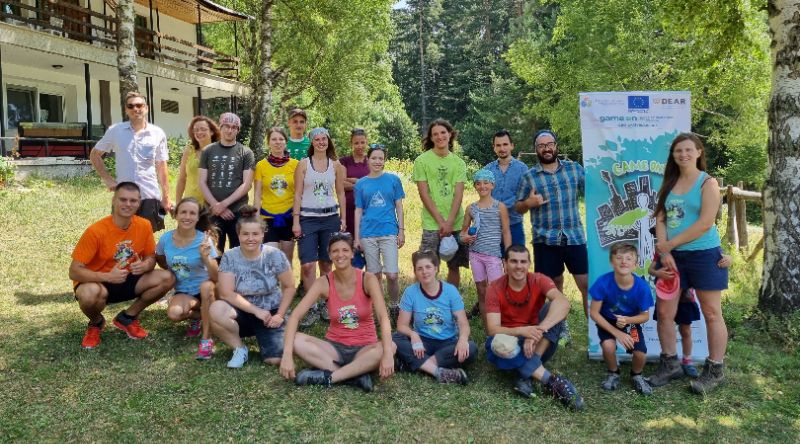 The highest parts of the mountains in Bulgaria are some of the areas which are most affected by climate change. The species associated with these ecosystems now inhabit a more limited area and are in danger of extinction because of the rise in temperatures. One of the symbols of Rila and Bulgarian nature — the Seven Rila Lakes — are undergoing rapid changes related to their characteristics, and severe eutrophication can be observed in the ones located at a lower altitude.

20 young people with different educational backgrounds — in the field of ecology, communications, law, power engineering, landscape architecture, medicine, pedagogy etc. participated in a 4-day-long adventure in Rila National Park. The event was organised by the Bulgarian Biodiversity Foundation under the ‘Game On | Don't let climate change end the game!’ project with the support of the European Commission’s DEAR programme, and was attended by experts from the Bulgarian Academy of Sciences (BAS), Rila National Park, Climateka, Sofia University and the South-West University in Blagoevgrad. They shared their research on biodiversity and talked in detail about climate change in the mountains.

Meanwhile, the Intergovernmental Panel on Climate Change (IPCC) published its latest report which takes a firm stand — the Earth is warmer by 1.09°C compared to the pre-industrialisation era, and the main reason for that is human activity and the use of fossil fuels. The rise in sea levels and the melting of glaciers cannot be stopped. Our society should take urgent measures to limit its impact and to adapt to natural disasters and extreme weather events which will become more and more common in our daily lives.

While the report is still triggering discussions and is being challenged by the powerful lobby of large businesses, which will be affected by the transformation needed, the changes in nature are already visible. Together with Hristo Panchev, PhD, the young ambassadors of the project brainstormed ideas as to how to communicate the climate change topic more effectively.

Part of the climate change issue is directly related to anthropogenic pressure on the Seven Rila Lakes. The temperature rise and climate change have intensified the eutrophication processes in the lakes and most affected by these processes are the ones located at a lower altitude — Trilistnika Lake (The Trefoil) and Ribno Lake (Fish Lake). That is why the management and restriction of the tourist flow is of key importance for the area, and visitors have to be informed about the rules in this delicate zone.

On the shore of Ribno Lake Assoc. Prof. Emil Gachev from SWU Blagevgrad talked in depth about the geological formation of glacial lakes and the processes which have turned them into what they are today. Glacial lakes are extremely dependent on rainfall due to their origin and the fact that there is no other water supply for them. The ‘Game On | Don’t let climate change end the game!‘ ambassador and young scientists — Boyan Zafirov presented his research on the impact of climate change on the Ribno and Trilistnika lakes through the analysis and comparison of satellite images and climate-related data.

Kiril Stamboliev, an expert on biodiversity from Rila National Park, joined us on the second day. He shared with the participants information about the different categories of protected areas in Rila Mountain — reserve, nature park, national park. We learned about the biodiversity monitoring and conservation programmes in the national park, and a great interest was shown in the monitoring and conservation work focusing on the chamois and the bear on the territory of the Park. The participants in the field trip had the opportunity to observe Balkan chamois twice and for some of them this was their first close encounter with the species.

On the third day we selected a spot with a great view to the Kalin reservoir and mounts Small Kalin and Great Kalin. While we were there, together with Assoc. Prof. Emil Gachev we discussed the cascades that were built at Karagyol for the purpose of power generation and where, with minimal human intervention and without changes to the ecosystem, an efficient energy sourcing was achieved. We observed the surrounding slopes and landfroms which were formed after the retreat of the glaciers in Rila.

The last day of the field trip we dedicated to an open-air lecture with a view to Mount Haramiyata. Chief Assistant Vladimir Vladimirov from BAS Institute of Biodiversity and Ecosystem Research presented the GLORIA research programme which studies the loss of the alpine biodiversity on a global level, and in which Bulgaria has been participating since 2019. According to scientists and based on the observations collected so far, climate change in the mountains is a fact and the upper boundary of the forest is moving towards the subalpine belt. This means that the species which inhabit higher altitudes — alpine species — have nowhere to go.

Climate change impacts not only alpine biodiversity but also the types of tourism which can be developed in those areas. This is what Siya Cholakova, PhD, from Sofia University shared. Ski tourism is especially sensitive to climate change due to the lower levels of snowfall and fewer snowy days. The regions where this sport is already developed should diversify the products and services they offer in order to ensure that the local communities can still earn a living.