Paving the way to a climate-friendly future 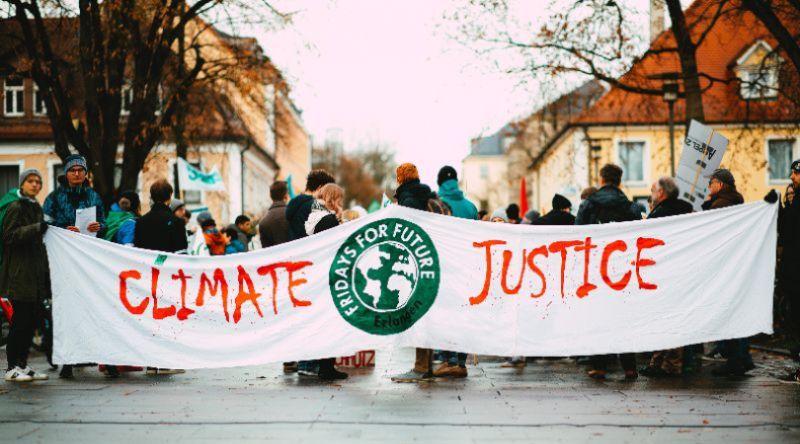 The ongoing climate crisis presents the world community with challenges on an unprecedented scale. What is at stake here is nothing less than the existence of humanity.

Straight to the point, if we are unable to limit the global temperature increase to 1.5° C compared to pre-industrial levels, this will massively upset the balance of our climate, rendering large parts of the earth uninhabitable and creating a humanitarian disaster. Decisive action and global cohesion are required. But instead of acknowledging that we can only halt the climate crisis together, individual interests and the protection of wealth are still being wrestled with at the political/policy-making level. It almost seems as though the scale of the climate disaster is beyond the bounds of human imagination. After all, the effects of global warming and the associated threats that it presents are more apparent in some places than in others.

Above all, those for whom climate change is already a daily reality, threatening their livelihoods, understand the seriousness of the situation. Those with no financial resilience, those pushed into poverty and hunger due to increasing crop losses, and those who lose all their possessions to extreme weather events are among those hardest hit — a fate suffered primarily by people in the Global South. In many cases, those affected have done little to cause the climate crisis, and are responsible for a mere fraction of global greenhouse gas emissions. This is clearly illustrated by the example of Central America, one of the regions that bear the brunt of the effects of climate change.

While, for example, the people of Nicaragua and Honduras produce around one tonne of CO2 on average each year, in other parts of the world, the average figures are up to 50 times higher. In Germany, the figure was over 9 tonnes in 2018. In that year, just three regions were responsible for more than half of all global emissions: China accounted for almost one-third of emissions (29.7%), followed by the USA (13.9%), and the EU (9.1%).[1]

The interplay between the environmental and social dimension of climate change raises ethical questions regarding justice. The 'Climate Justice' discourse turns the spotlight on responsibility. There are calls for those most responsible for causing climate change to shoulder their responsibility and pay compensation for loss and damage from climate change.

The majority of total emissions released into the atmosphere since the start of the industrial revolution originates from industrialised countries of the Global North. In addition to their historical responsibility, most of these countries (still) have sufficient financial resources to protect themselves against the effects of climate change. The paradox is that this wealth often stems from climate-damaging activities.

This illustrates the heart of the problem: as long as wealth is linked to economic growth, which in turn is linked to the consumption of raw materials and the use of fossil fuels, we will continue to live beyond the means of our planet. This concept of growth is the cause of resource scarcity, loss of biodiversity, the climate change crisis and, ultimately, social injustice.

The European Green Deal as a way out?

The world community took an important step by signing the Paris Agreement, and yet it has so far failed to distribute the remaining carbon budget fairly. Either individual countries’ climate change targets are not ambitious enough to reverse the process, or they fall well short of their targets. Existing power structures often facilitate decisions that have a fatal impact on climate policy, because economic interests are paramount.

With its proposal for a European Green Deal, the European Union plans to make Europe the first climate-neutral continent, focusing on resource efficiency, the circular economy, and green growth, which should be decoupled from carbon emissions. Even if the initiative succeeds, it still remains uncertain whether it will contribute to global climate justice. As long as there are no intentions to strike a global green deal, the question then arises whether problems will simply be shifted elsewhere, rather than being solved holistically. Where do the raw materials for green technologies come from? Which climate mitigation measures in other parts of the world will enable the EU to achieve climate neutrality? If the current model of reducing emissions where it is most favourable — in the Global South — is maintained, competing land use and exploitation will remain key issues that fail to take into account the perspective of those affected.

On a planet with finite resources, a system oriented to growth will always produce losers. Climate Justice can only become reality when the underlying causes of injustice are eliminated. This will require a change in social structures, a shift in power relations, and the opportunity to participate in relevant decision-making processes. This will only be possible in an economic system that respects the boundaries of our planet and focuses on the common good, the defence of human rights, and the preservation of the natural foundations of life.

Despite the bleak outlook for climate change, the mobilisation and activism undertaken worldwide by many sections of the population are overwhelming. The growing climate movement puts immense pressure on governments, and the louder their calls for a comprehensive social-ecological transformation become, the more the glimmer of hope for a (more) climate-just future will grow.

An eco day-off
July 18, 2021
For a life-affirming economy!
June 25, 2021
Grasslands and their impact on climate crisis
June 20, 2021
If you’re a gamer – at least do it for the planet
April 17, 2021
The new way to “compensate“ your carbon footprint – no, forests alone will not save us from climate change
March 26, 2021
In the past 75 years many flowers started raising the level of ultraviolet (UV) pigments in their petals
March 25, 2021
The privilege of Protest
February 15, 2021
Considering and addressing crises together — with intergenerational solidarity
February 12, 2021
Petitioning Campaign to Protect Biodiversity from Intensive Agriculture
January 28, 2021
Call for the revision of the Recovery and Resilience plan of Slovakia
January 27, 2021
Join the Nature and Climate Online School!
December 1, 2020
“Greetings from Climate Change!” campaign
November 27, 2020
LFN takes part in the LAMPA conversation festival with a discussion “Youth and climate sadness: How do you cool down your mind and live on?”
September 1, 2020
Young people at “Game On Climate Change” summer school generate ideas for mitigating climate change
August 21, 2020
Bulgaria stands up for Natura 2000
July 28, 2020
Dumbrăvioara, the Stork Village
May 26, 2020
Concept of Earth Overshoot Day visualizes global injustice
May 20, 2020
What habits should be kept after the quarantine is over?
May 15, 2020
EXCLUSIVE: Great Bustard nest found in Romania!
May 14, 2020
On 22nd of April, Bulgarian Biodiversity Foundation launched a campaign for young ambassadors.
April 22, 2020