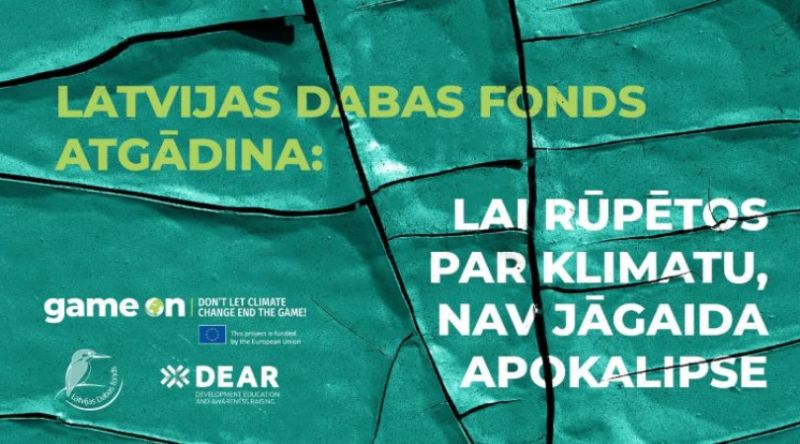 Although awareness of the seriousness of climate change is growing in Latvia — 42% of the population believe that it is one of the most significant problems in the world — it is still difficult for most people to perceive climate change as an important problem, as its impact on everyday life in Latvia is not felt as directly as elsewhere in the world.

Therefore, the Latvian Fund for Nature “Game On!” project activities, within the framework of the “Greetings from Climate Change!” campaign, addressed Latvians — and especially its youth — to highlight ongoing and projected climate change scenarios and consequences, and called for people to take action to mitigate climate change by becoming ambassadors for climate change. The campaign promoted 13 simple actions related to everyday situations which everyone can implement in their lives to make their activities more climate-friendly.

From 26 October to 30 November 2020, environmental objectswereplaced in several spots around Riga to show residents what climate-related changes may be expected in the future. Rising water levels in the Daugava river, prolonged heat in the city centre, a natural disaster at the Freedom Monument — currently they seem to be only dramatisations of unrealistic scenarios. But, according to experts’ opinions, we will be forced to face such phenomena in just a few decades. The environmental objects were located at the Freedom Monument, by the bus station tunnel on the Old Town side, as well as at the Vanšu Bridge Square near the main building of Swedbank.

The Latvian Fund for Nature, within the framework of the “Greetings from Climate Change!” campaign, called on young people in Latvia to work together to raise public awareness of climate change and promote the necessity of climate-friendly action in our daily lives. On the website www.klimatasataisieni.lv, a total 107 young people submitted their applications to become Climate Ambassadors and educate people in their immediate area — friends, family, schoolmates — by conducting a conversation on the topic of climate change. Applicants will receive training and materials to enable such a conversation.

"In our experience with climate issues and young people, we see that it is precisely young people who are genuinely concerned about climate change and who want to live in a way that reduces their impact on the climate. Therefore, with this campaign, we want to strengthen young people’s knowledge of climate change and ask them to become the ones who educate us all, because we are convinced that this is a meaningful and positive way to create a more climate-friendly life," says Maija Ušča, project manager of “Game On!” project.

Ojārs Balcers, climate expert at the Latvian Fund for Nature, explains: “We do not see polar bears going extinct in Latvia, but climate change will reach us as well. The main risks that will affect Latvia will be an increase in the frequency and intensity of floods, warm winters with many thawing periods, a smaller and less durable snow cover in the winter, and heatwaves in the summer. This will inevitably affect the ecological stability of species and ecosystems in general. Moreover, in today’s society, we can no longer think of our country as being separate from the global situation: the changes caused by climate change elsewhere in the world will affect us as well, and our actions here, such as consumption habits, affect the climate elsewhere in the world. That is why we, as a country, must work to mitigate climate change and every person, household and city must also take action to live in a more climate-friendly way."

If you’re a gamer – at least do it for the planet
April 17, 2021
The new way to “compensate“ your carbon footprint – no, forests alone will not save us from climate change
March 26, 2021
In the past 75 years many flowers started raising the level of ultraviolet (UV) pigments in their petals
March 25, 2021
The privilege of Protest
February 15, 2021
Considering and addressing crises together — with intergenerational solidarity
February 12, 2021
Paving the way to a climate-friendly future
February 10, 2021
Petitioning Campaign to Protect Biodiversity from Intensive Agriculture
January 28, 2021
Call for the revision of the Recovery and Resilience plan of Slovakia
January 27, 2021
Join the Nature and Climate Online School!
December 1, 2020
LFN takes part in the LAMPA conversation festival with a discussion “Youth and climate sadness: How do you cool down your mind and live on?”
September 1, 2020
Young people at “Game On Climate Change” summer school generate ideas for mitigating climate change
August 21, 2020
Bulgaria stands up for Natura 2000
July 28, 2020
Dumbrăvioara, the Stork Village
May 26, 2020
Concept of Earth Overshoot Day visualizes global injustice
May 20, 2020
What habits should be kept after the quarantine is over?
May 15, 2020
EXCLUSIVE: Great Bustard nest found in Romania!
May 14, 2020
On 22nd of April, Bulgarian Biodiversity Foundation launched a campaign for young ambassadors.
April 22, 2020